Our Advice and Volunteer Manager, Judi Lincoln, spoke on Future Radio on 2nd December about NCLS services and the challenges we are seeing our clients face locally. To listen to the Podcast of the interview click on the link below:

NCLS is delighted to be part of the years Civic Charity ‘Citizens Advice and partners’. This is a group of advice agencies making up the Norwich Financial Inclusion Consortium, helping City residents exercise their rights, promote equality and help reduce poverty across the city.

The tree’s theme is ‘Peace and Justice and can be viewed, along with others decorated by organisations and companies from across the city,  at St Peter Mancroft’s Church until the 8th December. 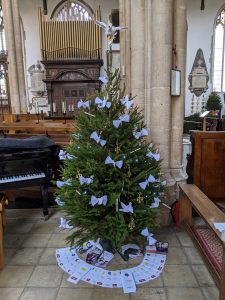 We held our Annual General Meeting on Monday 7th October in the Council Chambers in the City Hall.

It was also an opportunity to celebrate the long partnership we have had with UEA and the UEA Law School – we recruit approximately 50 of their law students each year and they underpin the delivery of all our services – without their support we could not help as many vulnerable clients as we do. We also receive substantial funding from UEA which contributes towards our core costs.

NCLS has seen a substantial increase in demand for its services over the last few years due to the combined effect of the cuts to Legal Aid, Welfare Reform changes and cuts in public expenditure. We helped a total of 2,827 new clients in 2018/19, a 5.8% increase on the previous year, and the complexity of issues clients are presenting with also continues to increase.

We saw increasing numbers of clients affected by zero hours contracts, low incomes, high rents resulting from a lack of affordable housing and clawback of overpayment of benefits meaning that many simply do not have enough income to live on. This has been exacerbated by the rollout of Universal Credit in Norwich in October 2018 resulting in a reduction in benefit levels and delays in payments.

We have only been able to meet this demand because of the support we receive from our 135 volunteers who include including 65 private solicitors who generously give their time for free and about 20 community volunteers as well as the 50 law students referred to above.

One of the key roles of the law students is to represent welfare benefit clients at Tribunal helping them to successfully access benefits they are entitled to. Tribunal Service statistics show that clients have a much greater chance of success if they are represented. The Welfare Benefits Team represented at 338 hearings in 2018/2019,a 13% increase compared to 299 in 2017/18, which in itself was 32% higher than 2016/17.

NCLS is currently winning 83% of the appeal cases which go to Tribunal compared to the national average of 68%, both figures clearly illustrating that the DWP assessment process is flawed. The Welfare Benefits Team, combining paid advisers and law students, secured £2,160,441 in benefit payments for their clients in 2018/19 bringing the overall total since 2013 to just under £7 million which contributes to the local economy as well as helping individual claimants. Income is calculated on the basis of one year from the date of Tribunal when in practice many appellants are given two or three year awards. 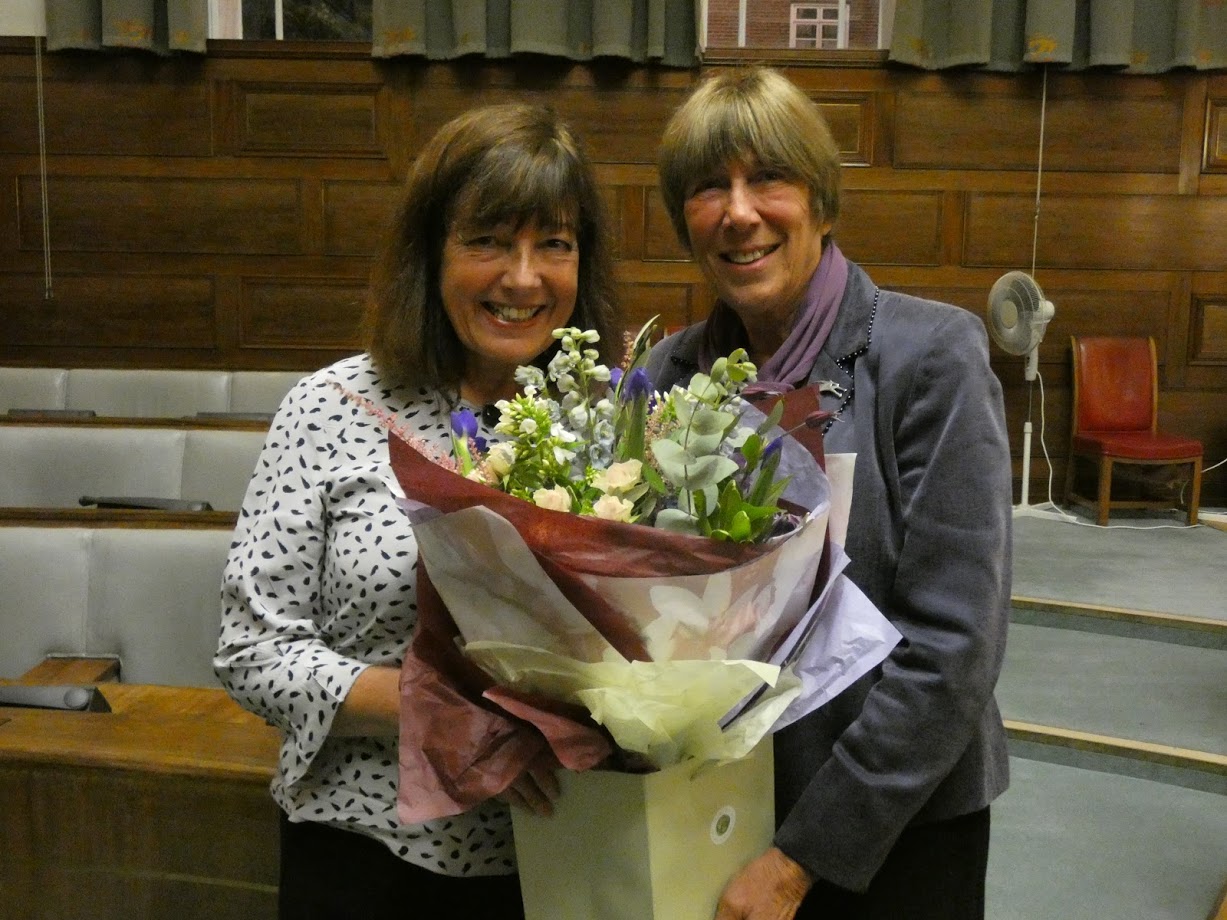 We are delighted to once again have the opportunity to recruit a trainee solicitor through The Justice First Fellowship.

The Justice First Fellowship Scheme was established in 2014 to support the next generation of students committed to public interest and social justice issues who want to pursue a career in social welfare law.

For more information on opportunities through the scheme, including at NCLS, please visit the Justice First Fellowship Website, which can be found here. The closing date for all positions is 16th September.

UEA’s careers service, Career Central, hosted an event to showcase excellence in student and employer engagement at the Sainsbury Centre, UEA on 7th May 2019.

NCLS was delighted be awarded the accolade of Most Supportive Voluntary Organisation in front of an invited audience of students, external organisations and Senior UEA Management. Gareth Thomas, Law Clinic Director said ‘Our excellent pro bono partners, Norfolk Community Law Service, have worked tirelessly for many years to create excellent opportunities for hundreds of our students’.

NCLS had nominated Sally Earl, Law Graduate and now computing master student and volunteer on our Welfare Benefits team for the Outstanding Student Volunteer Award and we are pleased to report that Sally was shortlisted and was runner up.

NCLS Decorates Tree at Charity Christmas Tree Festival
We were pleased to have the opportunity to decorate a tree for this years festival at St Peter Mancroft Church in Norwich, organised by the Rotary Club. Along with stars made out of our logo we also have gold painted scales of justice, judges gabbles and scrolls to represent a legal theme. Other trees at the festival were decorated by local organisation including Leeway, Nelson’s Journey, Norwich City Football Club, Steeles Law, Jarrolds and John Lewis. The festival was free to visit, but donations were welcome and all funds raised went towards supporting Norfolk Blood Bikes. 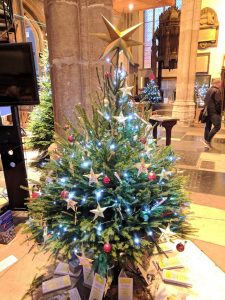 The 2018 Norwich Legal Walk took place on 7th June. Naomi Newell from Birketts Solicitors, a former NCLS volunteer who last year started to give advice at our Free Legal Advice service, helped to organise the event and said the following:

Thank you to the over 200 sign-ups for the Norwich Legal Walk on Thursday 7 June 2018 – with over 160 attending in the end, this was the biggest Legal Walk yet. With around double the participants, the Access to Justice Foundation and Eastern Legal Support Trust (“ELST”) hope that we can smash the £5,000 fundraising target, which we have yet to do in our six years of organising Legal Walks in our fine city.

Participants joined us from chambers, private practice, charitable organisations and quasi-legal departments to raise funds for the ELST, which allocates funding to various charities across the region including NCLS. Many of the participating teams also chose to raise 50% of their funds directly in aid of NCLS and we are very grateful for this.

Leading the walkers were Charles Watt, the High Sheriff of Norfolk, Mike Napier CBE QC, Jacqueline Lake, the Norfolk Coroner, and Sue Bailey, Norfolk & Norwich Law Society President. Mr Watt thanked the walkers for their dedication to improving the lives of others through participating and fundraising in aid of access to justice. Ros Brown, NCLS Chief Executive, also thanked walkers and the ELST for their continued support, particularly as pro bono lawyers on NCLS’ advising rotas.

Walkers enjoyed Grosvenor’s fish or sausage and chips at the Birdcage pub, kindly sponsored by Olsen Recruitment, Norwich & Norfolk Law Society and the ELST. After a hearty 10km walk following a long day at walk, the food was greatly appreciated by all!

Judi Lincoln, NCLS Advice & Volunteer Manager, said ‘We are delighted that Naomi’s volunteering experience with NCLS has contributed to her successful qualification as a solicitor and  are very pleased to welcome her back to advise the increasing numbers of clients seeking help.

Naomi, a qualified Dispute Resolution Solicitor with Norwich firm Cozens Hardy Solicitors, volunteered with NCLS throughout her 4 years as a student at UEA.

Naomi said ‘It is more important now than ever before that the legal profession does its bit for charities that provide much-needed free legal advice to the local community. I was fortunate enough to be involved with the volunteer scheme at NCLS when I was an undergraduate Law student at the UEA and I am thrilled to work for Cozens-Hardy LLP, which also supports NCLS. It was a very proud moment for me to sign my NCLS application form to enter onto the rota as a qualified solicitor after having started my degree in 2010 and I very much look forward to contributing, along with the other solicitors, to helping our local community.

NCLS hopes that Naomi’s application will be the first of a number of student volunteers who will return as successfully qualified solicitors.

Running in Support of Access to Justice
One of our wonderful volunteers, Chris Moore, ran the London Marathon on 23rd April in support of NCLS. Of his reasons for running in aid of us Chris said “Having access to justice is of high importance at a time when legal aid is very difficult to get. I know that NCLS’s work is hugely supported by volunteers without who they would not be able to provide the advice and representation that they do. It;s good to know that the money raised will be going directyl to support these services rather than being eaten up by high running costs.”

Chris completed the marathon in 3 hours and 44 minutes and so far has raised £440 for NCLS. Thank you Chris and well done!

NCLS featured in the Solictors Journal
Our CEO, Ros Brown, talks in the Solicitors Journal about the challenges bought about by cuts to Legal Aid and how NCLS is working to fil the gaps left by these cuts. The article also features ISCRE, who provide our Discrimination Advice Service.

The article can be found here.

NCLS mentioned in the House of Lords
The work of NCLS in providing free legal advice was mentioned by Lord Howarth of Newport (Lab) in his Motion to take Note of the Cuts to Legal Aid. Whilst highlighting the problems that the cuts are bringing Lord Howarth said ‘Organisations such as the Norfolk Community Law Service are fighting back, for example by providing work experience for law students in their free legal advice services. But voluntary and pro bono work is no substitute for legal aid’.

It is great that the hard and valuable work of NCLS and its volunteers is being recognised during the period of change bought on by the transformation of Legal Aid.

A full transcript of the Motion can be found here. 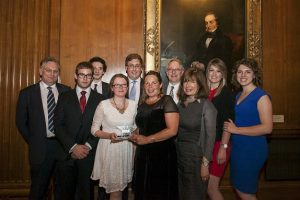 The Norfolk Community Law Service Welfare Benefits team is delighted to announce that December 2014 saw the Welfare Benefits service reach the impressive £1,000,000 milestone, in terms of income generated for our clients by overturning negative benefit decisions.

Since it was established in October 2012, the Welfare Benefits service has advised 1,082 clients about their social security appeals and has represented 214 clients before the First-tier Tribunal. We have also helped many more clients achieve favourable outcomes without the need to go all the way to a tribunal.

The service has made great use of the innovative partnership arrangement with the University of East Anglia’s Law School, which enables students from the UEA Law Clinic to volunteer for NCLS in various roles. The Welfare Benefits team trains students to represent clients at tribunals, with others trained in an administrative support role to work alongside our paid advisers.

The team is looking forwards to a busy and successful 2015. We are happy to receive referrals from other agencies, via the Norfolk Community Advice Network partnership, and directly from clients for advice regarding their social security appeals.